The descendants of Mortimer and Raymond Sackler, a pair of psychiatrist brothers from Brooklyn, are members of a billionaire clan with homes scattered across Connecticut, London, Utah, Gstaad, the Hamptons, and, especially, New York City. It was not until 2015 that they were noticed by Forbes, which added them to the list of America’s richest families. The magazine pegged their wealth, shared among twenty heirs, at a conservative $14 billion. (Descendants of Arthur Sackler, Mortimer and Raymond’s older brother, split off decades ago and are mere multi-millionaires.) To a remarkable degree, those who share in the billions appear to have abided by an oath of omertà: Never comment publicly on the source of the family’s wealth.
That may be because the greatest part of that $14 billion fortune tallied by Forbes came from OxyContin, the narcotic painkiller regarded by many public-health experts as among the most dangerous products ever sold on a mass scale. Since 1996, when the drug was brought to market by Purdue Pharma, the American branch of the Sacklers’ pharmaceutical empire, more than two hundred thousand people in the United States have died from overdoses of OxyContin and other prescription painkillers. Thousands more have died after starting on a prescription opioid and then switching to a drug with a cheaper street price, such as heroin. Not all of these deaths are related to OxyContin—dozens of other painkillers, including generics, have flooded the market in the past thirty years. Nevertheless, Purdue Pharma was the first to achieve a dominant share of the market for long-acting opioids, accounting for more than half of prescriptions by 2001.
Отсюда

"Pressures produced when penguins pooh—calculations on avian defecation". Seminal work. I kid you not. 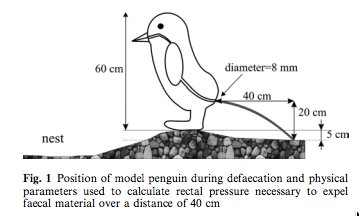